When I first caught up with Henry and Amy, they were new parents to Harper who was five months old and cute as a button. They struck me as a lovely, easy going pair so plainly dedicated to making a good job of it, and I thought what a lucky wee fella he was to have such cool parents!

Well, Harper now has another young man in the family, so the Fa’afili household has two young pre-schoolers running around the house. I caught up with Henry to ask him how things were going these days, and the great writer he is, he’s penned such a great reflection on life as it was, as it is now, and some sage musings on the parenting journey.

If you’re a parent of a crawler or a pre-schooler – I’m sure you’ll identify with Henry’s thoughts here. Thanks Henry!

PS Henry – print it off and pop it in the bottom drawer for your boys to read one day to see how life used to be. 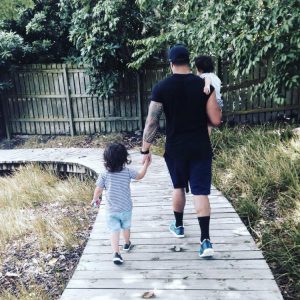 Looking back, how did the ‘infant’ advice you gave to yourself pan out? Is there anything extra on reflection that got you through, that you think parents really should know about this stage?

We actually laughed when we read my comment about the car, as we have been pulling that one out again recently, with Harper transitioning to not needing a nap-and it still works with him! It’s a bit harder to implement with another little boy in the mix now – his little brother Beau, but some afternoons he needs that sleep and we need to not have to deal with a cranky overtired 3-year-old, that may fall asleep at dinner! So, in the car he goes and it works amazingly-so yes some of the strategies have stayed with us.

Probably the most important thing we have learnt, and you may have been told it already from others is how hard things will pass, at the time whatever your baby is doing that is driving you crazy (wake ups, not napping long enough etc) is so bad and hard you wonder if they will ever get over it. Then suddenly they do. It’s passed and you are like thank god!

But usually then you enter to the next phase and there may be something else that comes up, haha but again that will pass too. It’s about getting through it as stress free as possible for both you as parents and for your baby. Sleep deprivation is hard there’s no doubt about it. I also think that setting a routine works well, even a rough one and you may need to play around with it to get it right for your child, they are all different so you shouldn’t stress if your baby doesn’t do what the book says or your friend’s baby does.

Physically I miss the cute baby chubbiness, blowing raspberries on his chubby little thighs while he cracked up in fits of giggles, there is nothing sweeter than your babies giggle, even now it’s my favourite sound hearing my boys crack up.

I miss watching him do things for the first time and his excitement and wonder at it all, watching him discover new things was really cool. He was definitely easier to please back then as well and no tantrums! An old cardboard carton could provide lots of entertainment.

I don’t miss the fact that you never seemed to have any downtime at that stage (unless they are asleep). They never sit still for long and their concentration span is quite short, so they are always on the go, crawling round grabbing whatever they can reach. They can actually work up some serious speed with that crawling so you have to always be right over them. I’m also glad we are through the teething! Do NOT miss that at all!

What’s family life like these days? What parenting stage are you at now? Got any tips for that stage, for parents keen to look ahead?

Family life these days…. Like I said above we now have two little boys, Beau is 22 months and Harper who is now 3. Being a relatively small age gap (17 months) has meant we’ve been quite busy since Beau’s arrival, but actually things are just starting to get a bit easier in the last few months as Beau is growing up a bit more.

My partner Amy feels like she’s just getting her breath back and is enjoying finding a bit of time to do things for herself like getting to the gym etc. We support each other in that way, as we both think it’s really important that both parents get time to do things for themselves. Sometimes even a small break can rejuvenate you and it makes you a better parent for it. It’s quite different when you have two instead of just one, you have to be a lot more organised and also more flexible too.

I would say we weren’t as strict with Beau’s routine as we were with Harper at the infant stage but we did still set a routine for Beau, we just learnt to be more adaptable with it to suit Harper as well. There was a stage there where we actually wondered if they were in cahoots with their wakeups, as whenever one slept in unusually late the other would randomly wake really early, every single time! Unbelievable. That passed though thankfully as it does.

However, like I mentioned earlier the next thing comes along, so for the past 5 months we’ve been swaying between needing a nap (but then not getting tired until 9/9:30 pm depending on wake up) and not needing a nap (no way could we get him to sleep in his room!) I would say this has been the most difficult of all the transitions for us with Harper. We may be finally getting through it as he is now able to last the day a bit better and doing a few days without a nap, so we seem to be getting there.

I think something you hear throughout early parenting is to make sure you are consistent, this is definitely something we try to do at this stage and it has helped establish rules, because as you know toddlers can be quite challenging (to put it mildly!) while they start to assert their independence.  Again, though just like in the earlier stages you may need to adjust your priorities to keep it as stress free as possible.  For example, some days you may have to leave the house looking like it’s been burgled in order to get somewhere on time, this is especially true on a day when Amy is organising the boys herself, just getting them sorted and in the car on a day-care day is challenging.

All children are different and learn things differently and at different rates, so make sure you support your child but don’t pressure them or compare them to others.  They will learn, but they may learn some things slower than others and some things quicker than others, it’s fine.

We have so much fun with our two boys, sometimes I think of what we’ll do when they are a bit older like going for bike rides all together and things, but I also want to make the most of this toddler time as everyone is so right- time flies, we can’t believe it’s been three years already.

With some more parenting track miles under your belt all round, do you think you’ve developed any particular parenting ethos, philosophy, or default setting for situations perhaps that might describe you?

The lessons our boys have taught both myself and Amy have been invaluable, so many new skills come with becoming parents. My life focus is still the same as I mentioned in my first interview, to make sure Harper has a happy and fulfilled life- just with one extra boy Beau added on. Sacrifices we make for these two don’t feel too bad when you get back all those laughs, cuddles and smiles. I wonder if I’ll be saying that in the teenage years haha.

All children are different and as they develop their unique personalities I think you need to make sure you cater to those differences. Children definitely need and like boundaries, but sometimes a child may not be being naughty just because they want to be ‘naughty,’ but instead the root cause can come from being uneasy or fearful of a certain situation. Once you can get to this root cause of the problem, you can then work better to erase the behaviour by addressing the real cause.  This is one thing I have learnt as we’ve gone along, approaching discipline this way when it’s needed (obviously you need to assess whether it is one of these situations or whether in fact they are just being naughty which can happen too) seems to be getting great results from our boys.

I also think it’s really important to celebrate your child’s strengths and help them to overcome their weaknesses. We all have strengths and weaknesses and children are no different, don’t focus on what they can’t do, with your support they will learn that in their own time. Focus on what they can do and try to enjoy each stage your child is at, they will only ever be at it once!